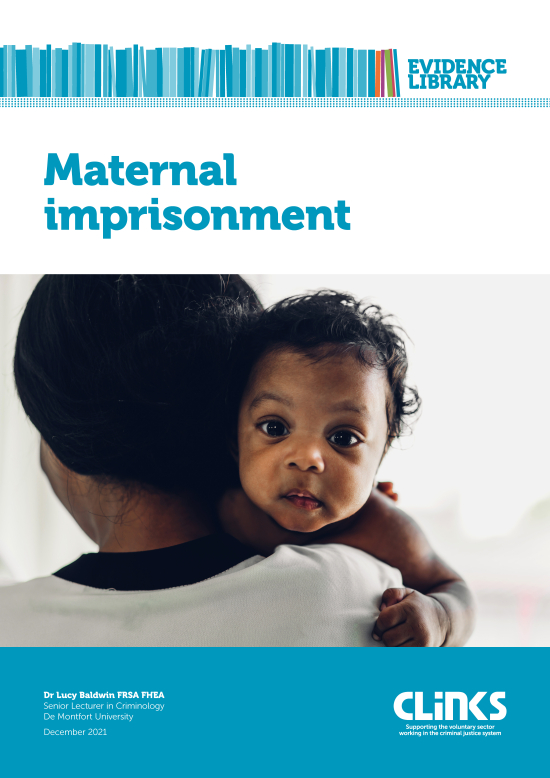 Why read this evidence review?

This evidence review provides an in-depth look at the issue of maternal imprisonment and the impact of this imprisonment on the children affected, the mothers themselves and the family members (typically grandmothers) who take over childcare responsibilities.

Dr Lucy Baldwin, Senior Lecturer and researcher at De Montfort University, reviews the current evidence-base – to which she is an important contributor – and covers a number of key issues:

This article forms part of a series from Clinks, created to develop a far-reaching and accessible evidence base covering the most common types of activity undertaken within the criminal justice system. There are two main aims of this online series:

Each article has been written by a leading academic with particular expertise on the topic in question. The topics are selected by Clinks’ members as areas of priority interest. Clinks intends to build a comprehensive directory of the best evidence available across a wide range of criminal justice topics within the next three years (2020-2023). The online evidence base is co-ordinated by Russell Webster on behalf of Clinks.

Click here to find out more about the Evidence library.

Want to find out more about this topic?

Part of the 'A matter of fact: what the evidence tells us' series, to accompany our Evidence Library, Clinks is giving you the chance to hear from the experts themselves. Dr Lucy Baldwin discusses the issues and the evidence base regarding maternal imprisonment and takes questions from the audience.

Watch the video recording below: