Service user voice - where are we?

It provides the oil and cement for delivering transformational change – it provides a mechanism for people to talk to each other in a non-judgemental way, which provides solutions and the potential for change in organisations that have great difficulty in contemplating some changes. It’s one of the most important and potent tool.” (Youth Offender Institution)

Clinks research reveals that efforts have been made in recent years to develop service user involvement in prisons and probation trusts. Offenders engaged with the Criminal Justice System (CJS), whether they are in prison or under the supervision of a probation trust, are also citizens. Service user involvement, at its best, can give offenders a modicum of control over their experience of the CJS and subvert the feeling of having services ‘done to’ them. Service user involvement refers to the process by which the people using a service become involved in the planning, development and delivery of that service to make changes and improvements.

Within the CJS, service users include offenders, ex-offenders, families and victims. I am particularly interested in offender and ex offender participation in service development and all the more so in the case of the services that they are compelled to comply with. However, as Chris Stacey points out in the last edition of Clinks News, there is a danger of treating people as ‘token ex-offenders’, an experience that is far from empowering.

Arnstein's ladder of participation, first articulated in 1969, is one model for considering the realities of involvement. As User Voice (2010) states, good practice in service user involvement entails using ‘the right rung for the right job’.

Clinks was recently commissioned by NOMS to undertake a review of service user involvement in prisons and probation trusts. Some of the findings were surprising and, on the whole, the researchers felt optimistic about the state of service user involvement in the criminal justice system. The main findings and a series of best practice examples are available to view here.

We found some very progressive examples of innovative practice from Prison Council elections to service users co-producing a Strategy for Service User Involvement at Leicestershire & Rutland Probation Trust. Many projects have run in-depth consultations with service users on particular niche areas of their service. For example, to address high levels of self-harm amongst the women prisoners, HMP Leeds worked in partnership with other agencies to develop a self-harm awareness programme for staff written by women in the prison and co-delivered by a prisoner.

Despite progress, there are many barriers to effective involvement; not least stigma from both staff and peers. There is a real need to research how service users themselves experience involvement. We concluded that a more systematic approach to service user involvement is required and raised a series of recommendations for consolidating the work that has begun.

There is not a firm evidence base for the benefits of service user involvement in the CJS, not even internationally, and our research showed that prisons and probation trusts doing little to monitor the process or outcomes. However, desistance theory supports the view that playing an active role in one’s community and taking on a measure of responsibility can assist in the offender journey away from crime. There is need to provide evidence for the widely held perception that service user involvement makes services more effective, has benefits for the confidence and self-esteem of those involved and assists on the path to desistance.

What does this mean for the VCS?

The ethos of the Voluntary and Community Sector; with a rich tradition of considering the needs of its users in a participatory and enabling style, could make VCS organisations excellent delivery partners for statutory organisations seeking to improve their engagement with offenders. Roughly 20% of prisons, and a small number of probation trusts, spoke of involving the VCS in service user involvement. We think it is very likely that there is more provision then we were made aware of, as staff interviewed were often uncertain.

There have been many recent attempts to gather the views of offenders on national policies, notably by User Voice and Unlock. However, there is no comprehensive information on the state of service user involvement within the voluntary and community sector (VCS) or where development is needed.

I am very keen to hear from VCS organisations who are using some form of service user involvement within their own services or in partnership with a statutory agency. As well as the benefits of service user involvement, there are many barriers, and Clinks would like to support our network to explore these. Post up your experiences of Service User Involvement within your organisation! 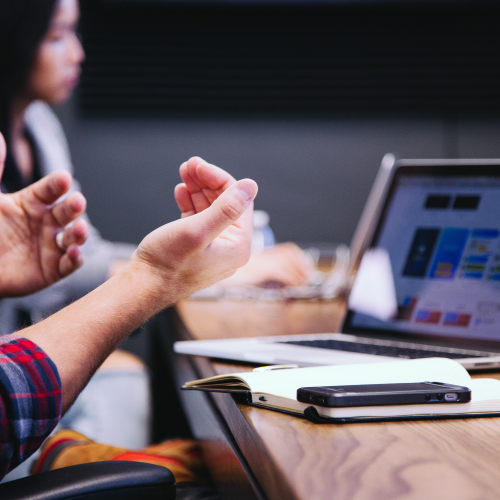 Emma Kidger, Clinks Sector Support, Members and Networks Manager, reflects on the progress of a commissioning forum that Clinks established in partnership with MoJ and HMPPS in late 2021. 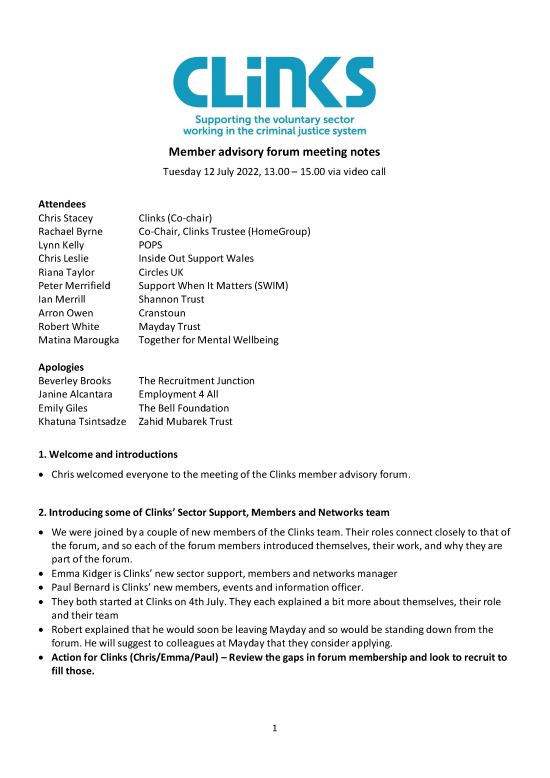