The government has published its Civil Society Strategy: building a future that works for everyone. The strategy provides a long-term vision for how the government can work better with civil society to tackle challenges in society, inform policy and strengthen communities.

There is much in the strategy that will be of interest to voluntary organisations supporting people in contact with the criminal justice system (CJS), including proposals for how the government will approach commissioning, funding and campaigning.

In a statement within the strategy, Rory Stewart MP, Minister of State for the Ministry of Justice, praises the voluntary sector as a vital partner for prison and probation services. He also highlights the role of volunteers and workers in charities that have themselves been in contact with the criminal justice system, though this coincides with further restrictions being made on people with convictions leading charities through the Charities Act.

As the first strategy of its kind for 15 years, this is a positive endeavour in and of itself, though some organisations are disappointed in what the strategy fails to say. In this blog we take a closer look at the relevant sections and how the strategy could impact voluntary organisations working in the criminal justice system.

Most voluntary organisations working in the criminal justice system provide locally-based, specialist services for people who are commonly understood to require a specific approach. These organisations have developed extensive expertise in supporting some of the most marginalised people in our communities.

The design of commissioning has too often however left these organisations on the margins. In the context of competitive commissioning, smaller organisations who lack the resources to invest in complex procurement and contracting processes are the most likely to lose out. Commissioning processes have also led to a much firmer focus on set outputs, which takes precedence over the flexibility and relationships that people accessing services need, and is a key strength of voluntary organisations service provision. Such tensions are heightened with the growing use of payment-by-results contracts.

It is therefore welcome that the strategy outlines a plan for “collaborative commissioning”, which commits to involving local players, including voluntary organisations, as equal partners in shaping how services are designed and delivered. We await firmer proposals on how this will be realised, but if properly pursued, an approach of this kind could ensure that commissioning processes are more accessible for smaller organisations to engage with.

The return of the grant?

Charities that have been marginalised by competitive commissioning often rely on grants to fund their work. We know from Clinks’ annual state of the sector surveys that this reliance on grants is especially true of smaller charities working in criminal justice. However, government grants for specialist criminal justice organisations declined 50% between 2009 and 2015, while the use of contracts increased. Given this significant and rapid decline in the government’s use of grants, it is encouraging to see the strategy commit to broadening the range of funding options for community initiatives, including a “revival in grant-making”.

The strategy argues for grants that provide proportionate management and greater flexibility for organisations, but that also incorporate the kind of accountability found in contracts. To pursue this, the strategy commits the government to develop new guidance for all commissioners on grant making to small and local charities, as well as making e-learning and best practice support available to all government grant-makers.

A better balance between grants and contracts is needed by the sector but without commitments on how this will be funded, it may be too early to celebrate a “grant revival”. A number of funding pledges are made in the strategy, through allocation of dormant assets, though many of these have been announced previously. Some organisations have raised frustration that the strategy fails to set out an ambitious framework for how an estimated £2bn in dormant assets can be harnessed to provide sustainable funding streams for civil society.

It is vital that voluntary organisations are able to speak up to influence change and inform policy and practice. Often, the voluntary sector is uniquely placed to speak on behalf of service users and communities.

This is particularly true of charities working with people in contact with the CJS ─ some of the most marginalised people in our communities. Organisations working to engage with and support this group not only have first-hand experience of the challenges their service users face when accessing statutory services, but can also elevate the voices of service users which are experts through experience.

In recent years however, government restrictions on campaigning and advocacy have created an atmosphere that has stifled voluntary organisations’ ability and confidence to speak truth to power.

The strategy broadly makes a positive case to address these concerns. It commits to convene a cross-government group to work with civil society to establish the principles of effective engagement in the policymaking process, while also proposing that the government works with civil society and the Electoral Commission to address concerns over the Lobbying Act.

The most significant problem with the Lobbying Act is the confusion it creates amongst charities, so any support to clarify the rules is a good move. However, many organisations would have wanted the strategy to go further ─ to implement Lord Hodgson’s revisions to the Lobbying Act and end the use of anti-advocacy clauses in grant agreements.

Social value and the Compact

The strategy also commits to extending and strengthening the principles of two existing initiatives ─ the Social Value Act and the Compact.

The Social Value Act currently requires commissioners to “consider” the social value of new procurements. However, the strategy states that commissioners will now be expected to actively “account for” social value. The Act will also be applied to the whole of government spending and decision-making ─ with the Department for Digital, Culture, Media and Sport applying this wider remit of the Act to their major projects ─ before being rolled-out to other government departments.

The strategy also recommits the government to the principles of the Compact. First signed in 1998, and refreshed in 2010, the Compact sets out how the government and civil society can work effectively in partnership.

Recommitting to something first initiated 20 years ago may not appear especially ambitious, but if fully adhered to the Compact should ensure effective and transparent engagement of voluntary organisations in the development of policy, a respect of the independence of the voluntary sector and a commitment to engaging early with voluntary organisations in the design of services. Clinks called for the government to commit to the principles of the Compact in our submission to the strategy, so we welcome this.

The strategy is a broad and mixed document, and the lack of concrete proposals begs the question as to whether it is really a strategy at all.

Regardless, there are tangible commitments to work with, and it provides a standard for how the government should engage with the voluntary sector over the coming years. This allows us to hold the government to account. The ongoing review into probation services provides an early opportunity to test the government’s commitment to meaningfully engaging the voluntary sector in the design and delivery of a service through a collaborative commissioning process. We are currently working with the Ministry of Justice to ensure our members voices are heard during the consultation process. 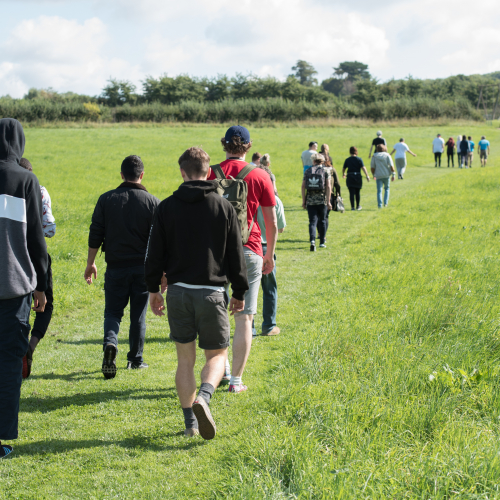 This blog breaks down what the £148 million of new investment into funding substance misuse services and reducing reoffending is going towards specifically, relating to the voluntary sector working in the criminal justice system. 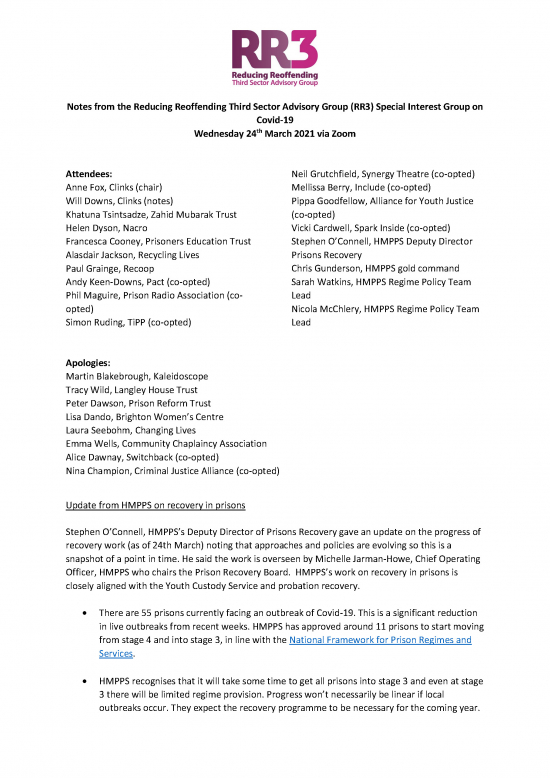 We are extremely disappointed that the JCVI advice on phase 2 of the COVID vaccination programme does not prioritise people in prison and those who work with them, including voluntary sector staff and volunteers https://gov.uk/government/publications/priority-groups-for-phase-2-of-the-coronavirus-covid-19-vaccination-programme-advice-from-the-jcvi/jcvi-interim-statement-on-phase-2-of-the-covid-19-vaccination-programme